The cuisine of Hungary, also known as Magyar cuisine (after that nation’s primary ethnic group) is based on centuries-old traditions of cooking and spicing.  It is characterized by its rich stews and sauces, mouthwatering spice, hearty soups and delicious deserts, and reflects the country’s long history and that of Europe’s many migrations and shifting centers of power.

The ancient Magyar tribes were nomadic, and this history of wandering on the Euro-Asian steppe can still be seen in modern Hungarian food.  The itinerent lifestyle and importance of livestock to Magyars may account for the predominance of meat in the Hungarian diet, and can be seen in dishes like goulash (in Hungarian “gulyás,” literally meaning “herdsman’s meal”), porkolt stew and the spicy fisherman’s soup called halaszle,

which are all traditionally cooked over the open fire.  The oldest Hungarian cooking utensil, the bogrács, or cauldron, originates from this time.  The bogrács is still essential to making an authentic gulyás, tokány or fish soup over the open flame.

The 15th century Hungarian king Matthias Corvinus and Beatrice, his Italian queen, were responsible for importing new ingredients and spices into the Hungarian culinary vocabulary: among others garlic, ginger, mace, onion, and nutmeg, as well as the use of fruit in meat dishes and stuffings, which is still common.  A separate culinary revolution was spurred at the same time by an influx of Saxons, Armenians, Italians, Jews, and Serbs to the Hungarian basin and Transylvania. From the Ottoman Empire, which partially occupied Hungary between 1541 and 1699, Turkish seasonings and dishes drifted into the cuisine, introducing such things as nougat, pilaf, and stuffed peppers and cabbage, which have become a staple of Hungarian cuisine.  The Turks also brought coffee, originally called, in Hungarian, “black soup.”  The Turks eventually gave way to the Hapsburgs during Hungary’s integration into the Austro-Hungarian Empire, and elements of Austrian cuisine entered into common use—most especially in the form of sweets and cakes. 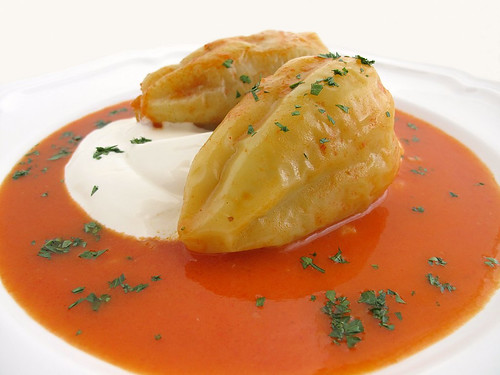 Despite this varied set of influences, the heart of Hungarian cooking centers on the soups and stews of the ancient Magyars, made in a single pot and over a fire.  Fishermen’s soup, or halaszle, is among the dishes that spark rivalries between different regional cooks (it is made differently on the banks of the Danube than it is on those of the Tisza, Hungary’s other main river).  Another dish, and one likely to be familiar to us, is paprikash, a stew of meat simmered in thick paprika gravy.  The famous Hungarian stew called

goulas (which we know as goulash) is made of vegetables (usually potatoes), meat, and noodles, cooked with paprika and other spices.   Vegetable stews, called fozelek, and cold fruit soups, especially hideg meggyleves, made with cold sour cherries, are also common.

Beef, pork, poultry, lamb, and game—as well as Hungarian sausage (kolbasz) and salami, play a large role in this cuisine.  Most dishes combine beef, pork, and sometimes mutton. (The prevalence of pork is largely ascribed to the 150-year Turkish rule of Hungary, during which the Muslim Turks, who did not eat pork, left only pigs behind after their raids of Hungarian villages.)  These meat dishes, as well as traditional stews like goulash, are usually served with noodles and dumplings—a small round pasta called tarhonya is a common garnish—with potatoes and rice on the side.  Tejföl or tejfel, a kind of sour cream similar to crème fraiche, is the most common condiment.  Among other uses, it is often blended into soups like paprikash, served as a dipping sauce for dumplings, and used as a filling for pancake dishes like palacsinta, or ham-filled crepes. 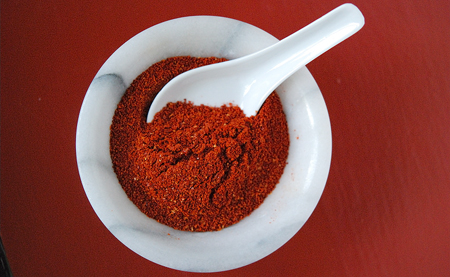 Perhaps the most common spice in Hungary—and that most closely associated with Hungarian cuisine—is paprika.  The word, in Hungarian, means “pepper,” and refers particularly to the Capiscum annuum (bell or chili pepper) from which the spice is made by drying and then grinding the fruit.  Although it was introduced during the Turkish rule of the country, the spice is now a symbol of Hungarian cooking (before its introduction, the most common spices were dill, horseradish, marjoram, rosemary, and sage).  Today, Hungary is a major producer of the paprika prized by cooks: the country boasts nine different varieties, ranging from Különleges, a mild, sweet variety with a bright red color, to Erős, a wickedly hot spice with a light brown coloring.  Most of the paprika we import from Hungary is Édesnemes (“Noble Sweet”), a bright red, slightly pungent variety.  In 1932, Hungarian scientist (and later Nobel prize-winner) Albert Szent-Gyorgy discovered that Paprika, by virtue of the peppers from which it is made, contains more Vitamin C by weight than lemon juice.

Dessert is an important part of the Hungarian cuisine, and includes beloved dishes like palacsinta (pancakes flambéed in dark chocolate sauce), and Dobos Cake, a layered sponge cake topped with a caramel slice.  Ingredients that are typical in sweet dishes include a sort of soft, cottage-like cheese, poppy seeds, and walnuts.  But the country’s oldest pastry is probably Kürtőskalács or kürtős kalács, known as chimney cake, stove cake, or Hungarian wedding cake, a common sight on street corners and fairs.  To make it, vendors wind ribbons of yeasty pastry dough, flavored with cinnamon and other spices, around a wooden cylinder and sprinkle it with sugar and walnuts, or almonds.  The cylinder is then placed on a wooden spit and hand-turned over open flame to cook. Hungary is also well known for its wines, which date back at least as far as Roman times—though with Greek, Hungarian is the only language that has a word for “wine” not derived from the Latin.  It is likely that the Magyars first had contact with winemakers in the Caucasus.  The most famous of Hungary’s wines is probably Tokaji, a white dessert wine.  The grapes used to make it are harvested late to encourage the “noble rot,” a

fungus that causes an especially concentrated, sweet wine. In 1571, Tokaji was christened “Vinum Rex, Rex Vinorum” (Wine of Kings, King of Wines) by Louis XIV of France.  Also well known is the full-bodied Hungarian red called “Bull’s Blood”—named after a rumored secret ingredient that fortified the defenders of the wine’s hometown of Eger during the Turkish invasion in 1552.

Hungarian chef Janos Toldi will prepare an eight-course meal of Hungarian specialties as part of NWLA’s Winter Festival on the Danube Language of Food Event.  Contact us at 360-321-2101 or [email protected] to reserve your place at the table.