Welcome to Türkiye: The Story of Turkish Cuisine

On March 28th at our Language of Food event, “Welcome to Türkiye,” Süreyya Gökeri of Seattle’s fabulous Cafe Turko will lead a cooking class focused on Turkish cuisine that can be made quickly and easily with seasonal ingredients.  Participants will learn to make fresh and healthy dishes like “Mercimek Pilavi” (lentil pilaf) and “Patlican Ezme” (grilled eggplant dip), and enjoy a look at Turkish coffee – an vitally important part of Turkish culture. Take a look at some of her delicious dishes in the gallery above!

A common saying has it that there are three types of cuisine in the world: French, Chinese, and Turkish.  This might be something of an exaggeration, but it  is true that Turkey has one of the planet’s great cuisines, due in part to its fortuitous location at the intersection of the Asian and Mediterranean worlds.  Take a look below to learn all about it – and don’t forget to join us on March 28th for the Language of Food Turkey event! See our website for tickets and more details.

Historically, food was an important part of Turkish social organization.  This has been the case since Turks from Mongolia and Western Asia first settled the region around 600 AD. Early on, Chinese culinary influences, including noodles and dumplings (later giving rise to “dolma” or wrapped and stuffed foods), were already prevalent in their cuisine. Much of the tribal population was made up of nomadic horse and sheep herders, moving flocks of animals annually from lowland to mountain. The tribes cultivated wheat, and used it in making leavened and unleavened breads, cooked on a griddle, grill, or buried in coals. This history of nomadism 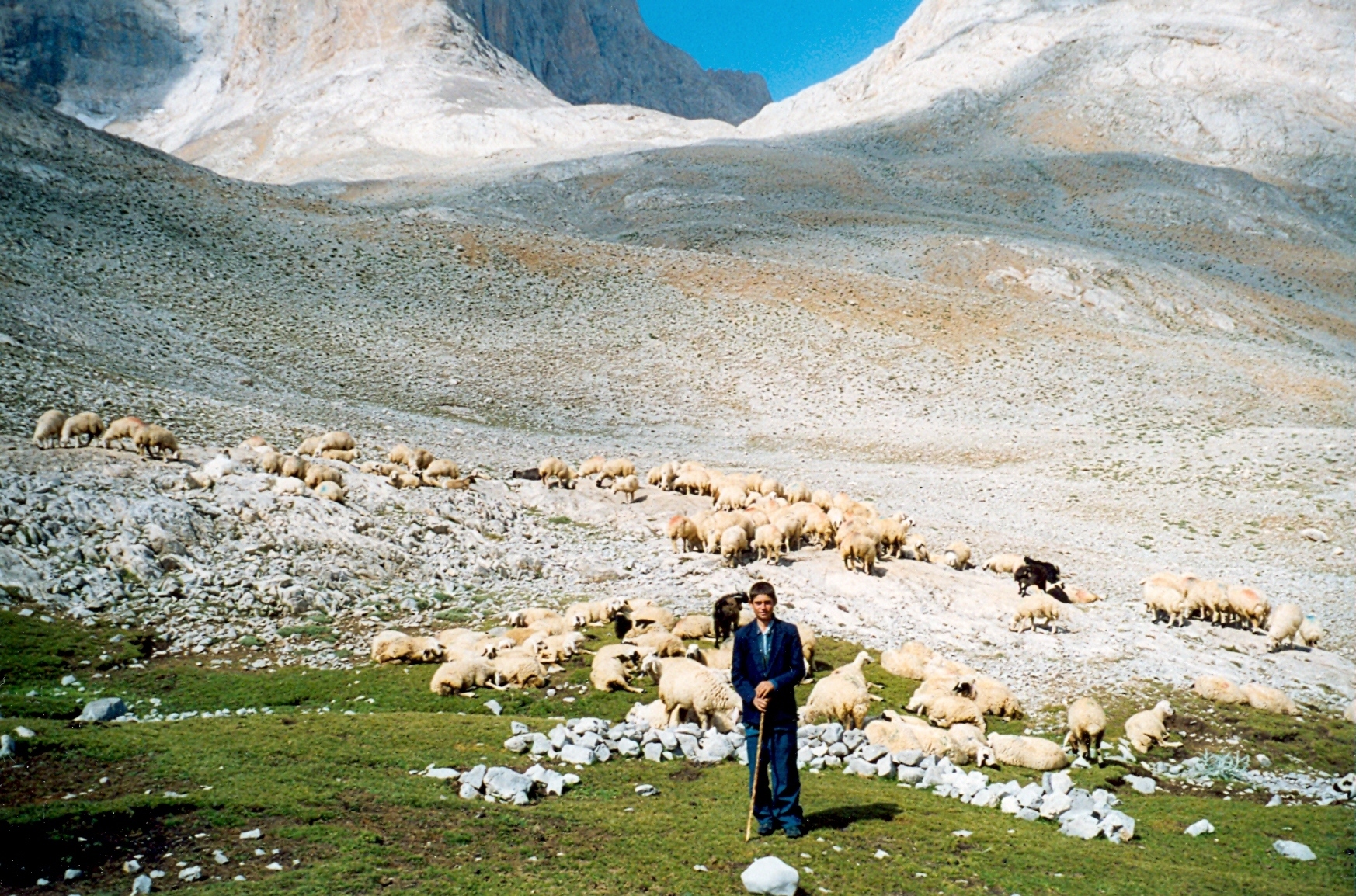 and animal husbandry gave rise to the heart of Turkish cuisine: a prevalence of dishes made with sheep’s milk and yoghurt, mutton, dried beans, wheat, and bulger.  Among the unique dishes of that time was “kumiss,” a rich beverage of fermented mare’s milk.  Soon, Persian influence introduced rice, nuts, and skewered meat, and as the Turks moved west toward the Mediterranean, they incorporated figs, olives and olive oil, and seafood into their diet.

Throughout early Turkish history, the ruling Khans and Beys were obligated to give feasts to feed their people – there, social standing, honor, and bravery would be reflected in the food one served, such as which part of a lamb and man would be allowed to eat.  As such, feasts represented an important occasion for the nomadic people to gather and establish social ties.  Later, the importance of food to Turkish social organization can be seen in the ranks of the Ottoman Janissaries, or military elite: The commanders were referred to as “Soupmen,” followed by officers known as “Chief Cook,” “Scullion,” “Baker,” and “Pancake Maker.”

During the Ottoman period, beginning in the 1400s, palace cooks were instrumental in the development of an inventive, rich, and elaborate cuisine, introducing dishes like yogurt salads, stuffed vegetables, and fish in olive oil.  By the year 1500, there were over 1,400 live-in cooks at the Ottoman court in Tokapi Palace, competing in inventiveness to please the Sultan’s palate.  As the empire expanded – eventually extending from Austria to North

Africa – the cuisines of conquered territories were added to the mix, and exotic ingredients imported from throughout the Ottoman world.  A complex social structure, control of the spice trade, and a lively urban life all had a place in developing a rich and flourishing culture.  The Palace kitchen has had a lasting legacy in Turkish cuisine, in the development of a wide variety of dishes that can be served in various combinations, though never in an arbitrary way.  This is one reason Turkish food is often spoken of as one of the world’s grand cuisines.

The traditional food of Anatolia falls into three categories: vegetables, meats, and doughs. Soup is one of the most popular dishes, and is often eaten for breakfast, usually with a good deal of bread.  Bread is important to all Turkish meals, and comes in many forms, including “pide,” or flatbread, and “simit” (sesame rings). Most of the country practices Islam, and because the Prophet Mohammed entrained his followers to “show respect to bread,” it is never thrown on the ground. Eggplant the most prevalent vegetable, followed by zucchini, beans, artichokes, and cabbage.  Pilaf, either rice or wheat depending on the region, is a mainstay at the Turkish table. Meat is usually lamb – pork is forbidden by Islam, and cows are usually raised for milk rather than meat – and occasionally poultry.  Almost every region of Turkey has its own “kebab” specialty, a marinated or plain meat dish that is steamed or grilled. “Doner kebab,” a piece of lamb turning on a vertical skewer next to a grill, and “shish kebab,” in which the skewered meat is grilled over charcoal, are probably the two most famous. In Turkish cooking, the flavor of the main ingredient is intended to shine through rather than being heavily seasoned – common seasonings that are used include mint, parsley, dill, sumac, garlic, and cinnamon. 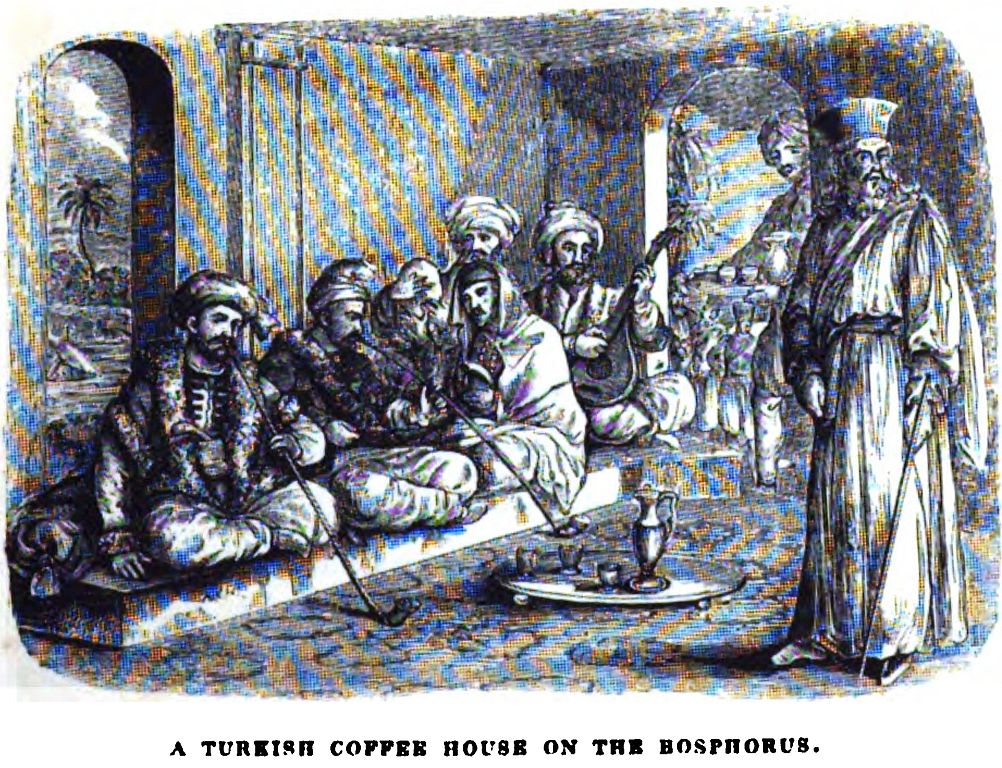 Coffee has long been part of Turkish culture. It’s importance can be seen even in the Turkish language, where the word for the color brown (“kahverengi”) means “coffee colored” and the word for breakfast (“kahvalti”) means “before coffee.”  The first coffee house was opened in Constantinople in 1640. Turkish coffee is boiled in a small pot, called a “cazve,” usually with sugar (although traditionally, a bride-to-be would test her fiance’s patience by making his with salt!).  After being poured into the cup, the very fine grounds are allowed to settle to the bottom, where they can be used to tell fortunes once the coffee is gone.

Turkish sweets are usually taken with coffee or as a snack. Halva (a sesame paste), baklava, and Turkish delight (“locum”) are known around the world. Many prefer tea to coffee – Turkish tea is prepared by brewing it over boiling water, and is served in small clear glasses.  For many, the day is unimaginable without tea.  Although Islam forbids the use of alcohol, there is a long culture of wine and liquor in Turkey: “raki,” a clear, anise-flavored liquor known as “lion’s milk,” is considered the national beverage and is often taken before meals.

Religion does dictate certain culinary traditions in Turkey – in particular the month of Ramazan, or fasting, during which Muslims refrain from food or drink during daylight

hours.  An end-of-day meal, called “iftar,” breaks the fast at sunset. At the end of Ramazan there is “Sekr Bayrami,” the candy festival.  Sweets like “locum” and “lokma” (a fried batter in syrup) are given out to children.

Meals are traditionally served on a large tray or a low table or the floor, around which guests will sit on cushions.  Dinner is preceded by a series of appetizers, called “meze,” which are also taken as an accompaniment to “raki” and other alcoholic drinks.

In every Turkish household, food is a key part of the country’s famous hospitality – rich with cultural, historic, religious, and symbolic value.  Come experience it for yourself on March 28th at NWLA! More details and tickets are available at our website, www.nwlanguageacademy.com.