The Music of Morocco 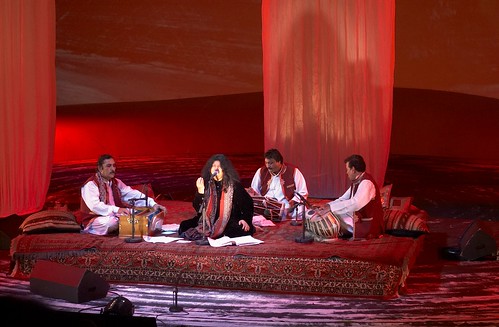 In preparation for Saturday’s event, An Evening in Marrakesh, this week we will explore a few of the intriguing facets of Moroccan culture.

Music in Morocco is as diverse and intricate as the country itself. The type of music most widely enjoyed typically depends on the region. That being said, there are six primary genres of Moroccan music: Berber music, Chaabi, Gnawa, Malhun, Rai, and Sufi music.

There are three different subcategories of Berber music: that found in villages, that in rituals, and that in the professional circuit. Within these three subcategories, instruments range from flutes, drums and voices, to the more complex variety led by a poet, or amydaz, accompanied by drums, a rabab (a type of single-stringed fiddle), and a type of double clarinet. Other Berber traditions add in lutes, cymbals and unfold the performance in set stages, from a single rabab, to sung poetry, to dance. Music is an important part of Berber life, used to mark celebrations like marriage as well as for protection against malicious spirits.

Chaabi is a hybrid of numerous varieties of Moroccan folk music. Originally performed in markets, Chaabi can now be found at many celebrations and important events. During the 1970s, Chaabi music gained popularity as it found a place alongside Egyptian and Lebanese music. Early Chaabi music consisted of a lute and a percussion instrument called a hadjuj, but evolved to include a type of chordophone called a buzuk, and even electric guitars.

Gnawa is generally associated with mysticism and spiritual practices. Gnawa found its way to Morocco from Sub-Saharan Africa, blending the Sufi traditions with early African animistic traditions. Because of this, some similarities can be found between Gnawa and other musical traditions of the African diaspora in Brazil, Haiti and Cuba.

Malhun, or Milhûn, is a type of melodic, sung poetry with roots in classical Andalusian music. Malhun is generally agreed to have come primarily from exclusively masculine, working-class craftsmen. A Malhun suite traditionally consists of two distinct parts, the taqsim overture which is played on an oud or violin, followed by the qassida, or sung poem.

Though more closely associated with Algeria and Egypt, Rai music has a distinct presence in Morocco, in part due to the presence of a high number of Algerian-born Moroccans in the Eastern part of the country. An interesting distinction between singers of Rai and Chaabi is that the former are called “cheb” (or “young”) while the later are referred to as “sheikh” (an honorific meaning “elder”). Rai music was traditionally sung by men, but by the 20th century, female singers were gaining popularity. Originating among the poor, Rai music often deals with social issues in lyrical narratives.

Music is integral to the spiritual traditions of Sufi brotherhoods (called tarikas), which have a strong presence in Morocco. While the mysteries of Sufism are difficult for outsiders to grasp, Sufi music knits into their meditative rituals wherein participants reach a trance-like state of higher consciousness. Not surprisingly, Sufi music is known for its hypnotic and otherworldly nature and is generally without rhythmic structure.

Don’t miss out on experiencing Morocco’s rich musical traditions on Saturday, October 23rd at our event, An Evening in Marrakesh. Contact us at 360-321-2101 or [email protected] for more information.