Pastries of the Danube Region 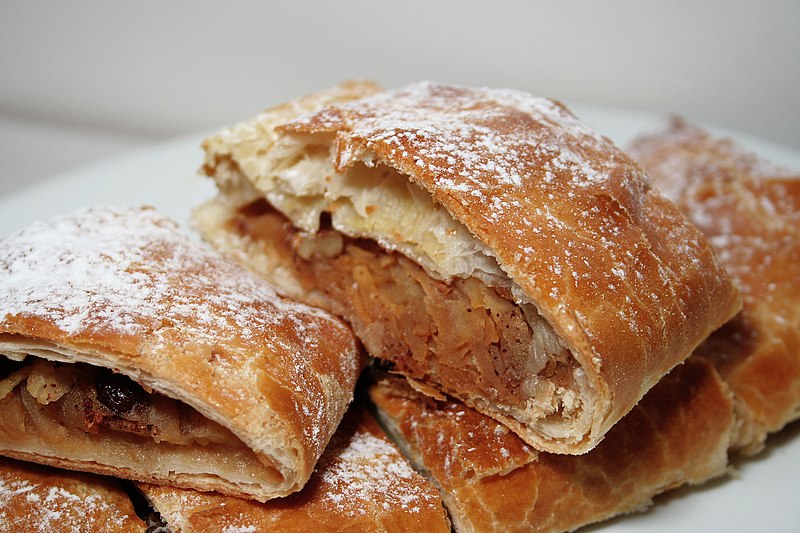 Unlike so many of the pastries Austria is famous for, a good Apfelstrudel, or apple strudel, shouldn’t melt in the mouth. A crisp, cracking, brittle pastry with a crunchy, almost sharp resistance on the tongue is the true mark of strudel perfection: mushy, doughy, or wilted pastries need not apply.  The word strudel, in high middle German from which it was coined, means “whirlpool” or “eddy” and aptly conjures an image of the soft, sweet apples swirling water-like between layers of flaky crust.

In conjunction with our Winter Festival on the Danube Language of Food event, veteran Viennese pastry chef Richard Wittmann will lead a class on the techniques of this most famous (and famously challenging) of Austrian desserts.  Chef Wittmann first learned his craft as an apprentice in Vienna, Austria and went on to work as pastry chef for hotels in Austria, Germany, Switzerland and the U.K. before coming to the United States.  He settled in Seattle, where he spend 22 years as dessert chef for the Sheraton and Olympic Hotels.  He has also taught baking and pastry at the Art Institute of Seattle, demonstrated techniques on KING 5 TV, won 1st Place and Best in Show medals at baking competitions worldwide, and had the honor of baking cakes for two different U.S. Presidents.

Strudel is definitely among the most beloved offspring of the former Austro-Hungarian Empire, but it did not, in fact, originate there.  It was actually conceived in the Ottoman Empire, where flaky pastries surrounding fillings are a hallmark of the cuisine–think of Turkish baklava, pide, and borek.  Nonetheless, apple strudel is now as Austrian as apple pie is American, and every Austro-Hungarian cook who wants to be taken seriously is expected too know how to stretch the dough to a near impossible thinness.  In Austria, cooks say the dough should be so thin that you can read a newspaper through it – one Emperor’s perfectionist cook said a love letter – while the Hungarian saying is that is that the dough should be large enough to wrap around a Hussar and his horse.  Americans say the dough should be as thin as phyllo—which is a fine substitute for making your own, though real strudel dough is a great deal more elastic and has a much higher gluten content than phyllo.

According to Chef Richard Wittmann, who will be teaching our pastry class, any real strudel lover should try making the dough at least once.  Stretching dough may seem intimidating, but in reality it’s not that much more difficult than making a pie crust.  The key is patience, and lots of it.  If the dough tears, don’t fret: any mistakes will be covered when you roll up your strudel.  A perfect strudel dough takes practice, and is more fun as a two—or four!—person job, so it’s a perfect excuse to gather your friends or family for an afternoon’s project.  Cover a table (one of at least 2 /12 by 6 feet works best) with a clean bedsheet or tablecloth.  Be sure to take off your rings and other jewelry before starting, and roll up your sleeves—buttons and cuffs will cut the dough as you stretch.

Serve your strudel warm, the same day you make it if possible (within 30 minutes of baking is best, with ice cream or whipped cream).

Inge Roberts, a German native, will teach the class to make Vanillekipferl and Nürnberger Eierzucker, two types of molded cookies from the North of Germany, and will bring the collection of cookie molds she acquired in München, which were hand-carved around München and Nürnberg.

Inge remembers how her family, each Christmas, would bake a selection of Weihnachtsplätzchen (Christmas cookies), very simple and so fragrant with butter and spices that they perfumed the entire living room.  There, star shaped paper plates would be set out, crowned by a heart shaped Spekulatius cookie with the owners name iced on in white icing.  The plates would also hold a perfect orange, a small red apple, some nuts in their shells, dried figs, a loaf of Niederegger marzipan, a few of each of the family’s Weihnachtsplätzchen – all that arranged on top of small pine branches.

Join Inge and Chef Wittmann for a cooking class and learn to make Apple Strudel and Weihnachtsplätzchen part of your own family’s holiday tradition!