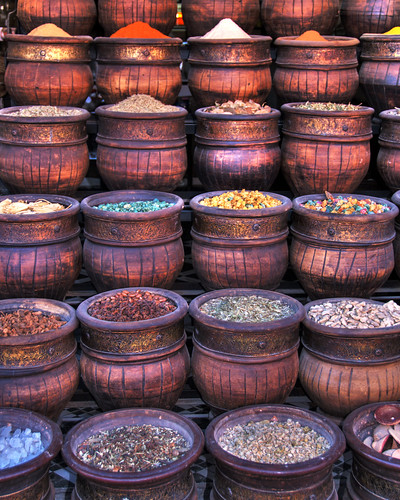 Moroccan cuisine is some of the most diverse in the world. This is due in part to Morocco’s long history of interaction with other countries and cultures. Moroccan food is a hybrid of Berber, Spanish, Corsican, Portuguese, Moorish, Middle Eastern, Mediterranean, and African cuisines. The unique flavors of Moroccan cuisine include unrefined, cold-pressed olive oil, pickled lemon, dried fruit and rich, heavy spices. 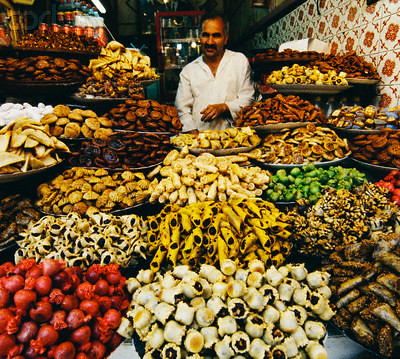 Morocco’s many influences find their way into a happy marriage with the local produce and meats. Morocco is home to a wide range of Mediterranean fruits and vegetables as well as more tropical varieties. Chicken is the most widely available meat, and together with seafood, is the most common source of protein. While lamb is preferred by most, beef is the most commonly eaten red meat as it is generally less expensive. One of the most widely recognized Moroccan dishes is couscous, which is believed to be of Berber origin. Traditional couscous is made by rolling and shaping moistened semolina wheat (though different grains may be used regionally) into small spheres and then coating the granules with finely ground wheat flour. The finished product is typically steamed.

Spices are integral to the exotic flavors of Moroccan cuisine. As a highly trafficked crossroad for traders from all over the world, Morocco has enjoyed imported spices for thousands of years. These supplement the local spices like mint and olives from Meknes, oranges and lemons from Fez, and saffron from Tiliouine. Spices commonly used in Moroccan food include karfa (cinnamon), kamoun (cumin), kharkoum (turmeric), skinjbir (ginger), libzar (pepper), tahmira (paprika), anise seed, sesame seeds, qesbour (coriander), maadnous (parsley), zaafran beldi (saffron) and mint.

Moroccans generally eat with their hands, using bread as an aid to scoop the more liquid dishes. Traditionally, the midday meal is the largest of the day, with the exception of the holy month of Ramadan. A traditional meal begins with a selection of hot and cold salads, followed by tagine, a kind of slow-cooked stew. Typically, a lamb or chicken dish is next, followed by couscous served with meat and vegetables. Meals end with a selection of pastries and a cup of sweet mint tea. 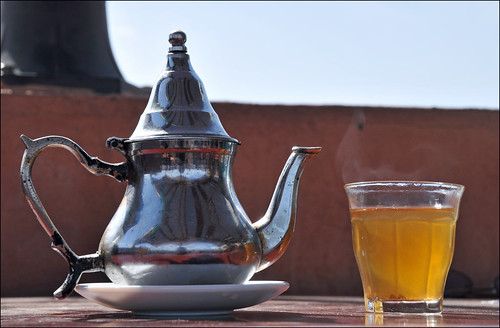